We are glad to inform you that the new edition of Ming Qing Studies 2016 has been finally issued. Digital and hard copies can be purchased on-line at “Aracne Editrice” (see contents below) http://www.aracneeditrice.it/aracneweb/index.php/pubblicazione.html?item=9788854899360.

Ming Qing Studies is a yearly publication, both on line and in printed form, which continues the positive experience of Ming Qing Yanjiu edited by Paolo Santangelo. Thanks to the cooperation of several scholars settled in Italy and abroad, it intends to widen the debate on the historical and cultural issues of late imperial China as well as pre-modern and modern East Asia. Although this publication focuses on late imperial China, its scope is broadened to the whole East Asia area, with its new cultural and anthropological features which are manifested in this fundamental period of transition from local to global history. 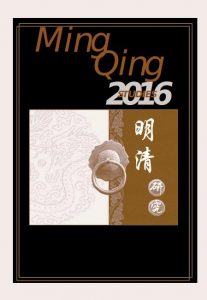 67 What was Tolerated? The Reinterpretation of the Edict of Toleration of 1692
CHEN YUFANG

107 ‘Angels of Vengeance’: The Influence of Russian Anarchist and Populist Movement on the Chinese Revolutionary Discourse during the Last Decade of the Qing Dynasty
GAIA PERINI

267 Thinking through the Heart of a Child: Luo Jinxi on Body and Ritual
ZHENG ZEMIAN

289 The Socio-Cultural Interaction between Russia and China in the 17th-early 20th Centuries. Some Observations Inspired by a Monograph by Nikolaj Samojlov
ANNA DI TORO