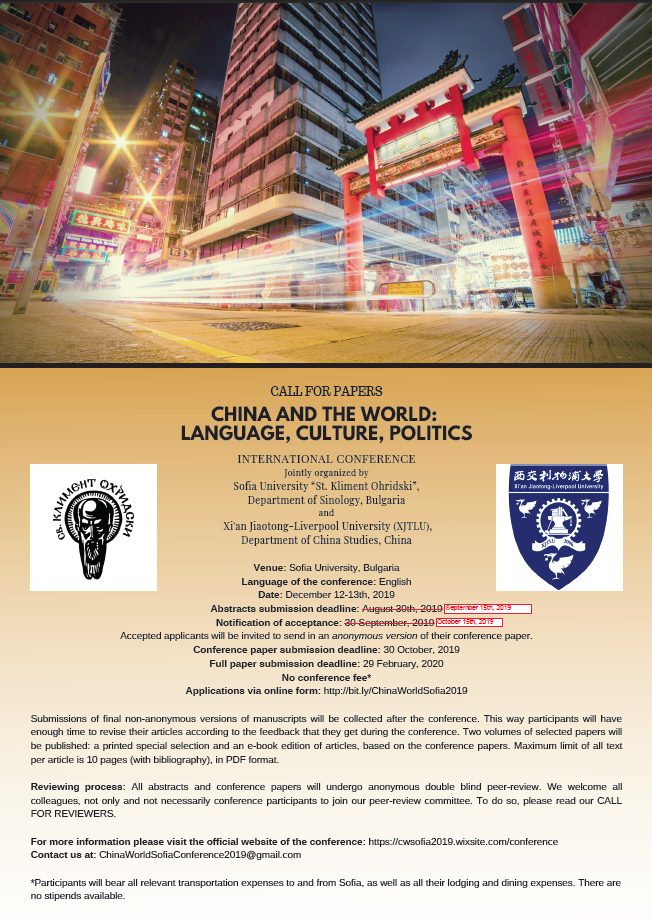 One of the most profound changes in the world in the second half of the 20th and the beginning of the 21st century is undoubtedly the rising of China. It’s opening to the outside world has had the effect of a tectonic shift in the world economy, sending out gravitational waves that have affected all corners of our planet. Back in the second half of the 19th and the first half of the 20th century, it was the West that actively engaged with a conservative, technologically backward Chinese world of former grandeur, disturbing regional balances, traditional bureaucracy, as well as the political authority of local leadership. Presently, at the end of the second decade of the 21st century, China considers that it has “the ability, the will, and the responsibility to contribute wisdom and strength to the improvement of the global governance system”. By creating a new “symbiotic international system”, with “cyber-sovereignty”, securing loans and investments in contracted projects with new “Chinese characteristics” in faraway foreign lands and seas, the country proposes a new “Chinese solution” to a world in crisis. Controversial issues need to be addressed, because China needs the world, and the world needs China.

China has gone a long and winding road since the founding of PRC in 1949. After turbulent first three decades, the policy of “reforms and opening up”, introduced in 1978, led China to joining the WTO in 2001, a hallmark of becoming a full-time member of the global cultural, political and economic universe. Nowadays, the effects of the rise of financially strong and more and more assertive China can be felt all around the globe. In the short span of less than ten years, it has built an international network of 548 Confucius institutes for the mass dissemination of Chinese language and culture worldwide, strategically located in most major world universities. A total of 1193 Confucius classrooms have been embedded in key primary and high schools, and more than 5,600 teaching sites established in 154 countries and regions, staffed with tens of thousands of full-time and part-time teachers from China, teaching more than 2 million students globally at any given time (China Daily, 5.12.2018). With student numbers growing exponentially, teaching Chinese is now a global business.

In the last decade, we also witness various aspects of China’s new “going out” strategy employed in basically every sphere of global politics, economy and culture. Especially after its second opening to the world – The Belt and Road Initiative, China became an active force searching for new consumer markets, new expansion territories, more natural resources, as well as redefining its relations with the EU, US and the states within the Asia-Pacific and Indo-Pacific region. In short, for the first time since the times of Ming Dynasty China is an active force contributing to global politics, economy and culture and not just being a recipient of the external influence.

In order to be able to face the challenge of these redefined relations between China and the rest of the world, and appreciate the opportunities it brings, Chinese culture, values and modes of communication, art and literature must be better understood, translated and presented on an unprecedented scale. Following, Chinese linguistic and cultural studies need to solve new problems, both theoretical and practical, in order to create more suitable textbooks and teaching materials for foreigners of all ages, especially for advanced level learners. The growing film and online industry similarly require high-quality audio-video translators. For the sake of effective dialogue with the new (old) world power, adequate knowledge of Chinese politics, economy and society cannot fall behind.

The conference is organised in commemoration of the 70th anniversary of the establishment of diplomatic relations between Bulgaria and China. Bulgaria was the second country in the world to recognise the People’s Republic of China just the day after the great inaugural ceremony conducted on 1 October 1949, at the Tiananmen Square in Beijing. In the following days, only a handful of countries – Romania, Hungary, Czechoslovakia and Poland– all from the Eastern Block, followed suit. This forum thus provides an excellent opportunity for scholars and students from all these countries to exchange valuable insights and experiences on a broad number of subjects on China’s development from the perspective of the past seven decades.

The conference is jointly organised by the Sinology Departments of Sofia University in Bulgaria and the XJTLU in China. Hopefully it will bring together leading European and East Asian scholars to engage with the subject of China’s increasing role in Central and Eastern Europe, and the Balkans in particular. It aims to bring them together, to discuss and share their thoughts and ideas, and introduce them to the broad academic public.

The conference plans to include the following topics for discussion:

4. The ideal Chinese textbook – from beginners to the advanced

6. Chinese culture in the 21st century – tradition and modernity

7. Chinese Art – past and present

8. Chinese religions and their dialogue with the modern world

9. Chinese social and cultural psychology in the 21st century

13. The Belt and Road Initiative and the Balkan Silk Road

14. Relations between China and the states of Europe, Asia-Pacific and Indo-Pacific

15. China and the World in the 20th and 21st century – between conflict and coexistence (How the world has affected China’s internal development and how China is affecting the development of the world in the past 70 years)

We are looking forward to your participation.

Professor Richard T. Griffiths (Emeritus professor of International Studies at Leiden University and Research Fellow at the International Institute for Asian Studies. Author of ‘Revitalising the Silk Road. China’s Belt and Road initiative in context’ (2017) and ‘The New Silk Road: Challenge and Response’ (2019)

Please refer to attached documents for their brief biography and speech topics.

Language of the conference: English

We are looking forward to seeing you in Sofia.